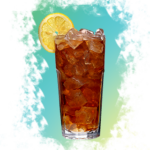 I admit it. I’m an iced tea addict. Not just any old ice tea addict but SOUTHERN style ice tea. I don’t drink many sodas and try to have only one or two cups of coffee a day, but I constantly keep a glass of iced tea close. I’d guess I probably guzzle a gallon of tea a day.

I became concerned about my weight. While I wasn’t outright fat, let’s say I was getting “fluffy.” WHERE could I cut some calories without actually dieting? All that tea……all that sugar……..hmmmm…..

In my opinion weight gain and loss is more involved than adjusting calorie intake – activity levels, etc. also have to be considered. Still, eliminating some calories, especially those that come in the form of “junk” calories – which is what I consider so much sugar it my tea to be – should be a good thing, health-wise and weight-wise, right?

First I cut back on the amount of sugar I poured into my tea. One cup. That took some getting used to. Even at that level, I probably gulped down around 350 extra calories a day. It may not sound like much, but figure how much it really is over time.

A friend had dumped most added sugar from their diet and suggested I give stevia a try. I did. In my opinion stevia comes closest to real sugar than anything else I have tried and best of all it has ZERO CALORIES. Just as cutting back on the amount of sugar took some time to get used to, so did the switch to stevia. Stevia is said to measure cup for cup like sugar, so I stuck with the one cup per gallon since I’d already gotten used to that amount of sweetness.

Everyones metabolism is different so what works for one person may not work the same for another, but over time I am losing weight and haven’t changed anything other than how I sweeten my tea. IT TOOK TIME. The loss has been so gradual it really wasn’t obvious but I can tell it in the way my clothes fit. Without dieting or extra exercising I’ve probably dropped at least one size. It’s enough that I’m hoping I still have some of the clothes that had become to snug for my fluffy self.

I have NOT eliminated other sugar in my diet, only that in my iced tea. I still use sweetened creamer in my coffee (I’m not a huge coffee drinker.) I don’t cook with stevia (but I’ve been told you can’t tell the difference.) And when my old sweet tooth flares up I feed it – whether it’s a candy bar or donuts and I feel a lot less guilty that I once did.

Imagine if one did this ALONG with improving their diet and exercise….